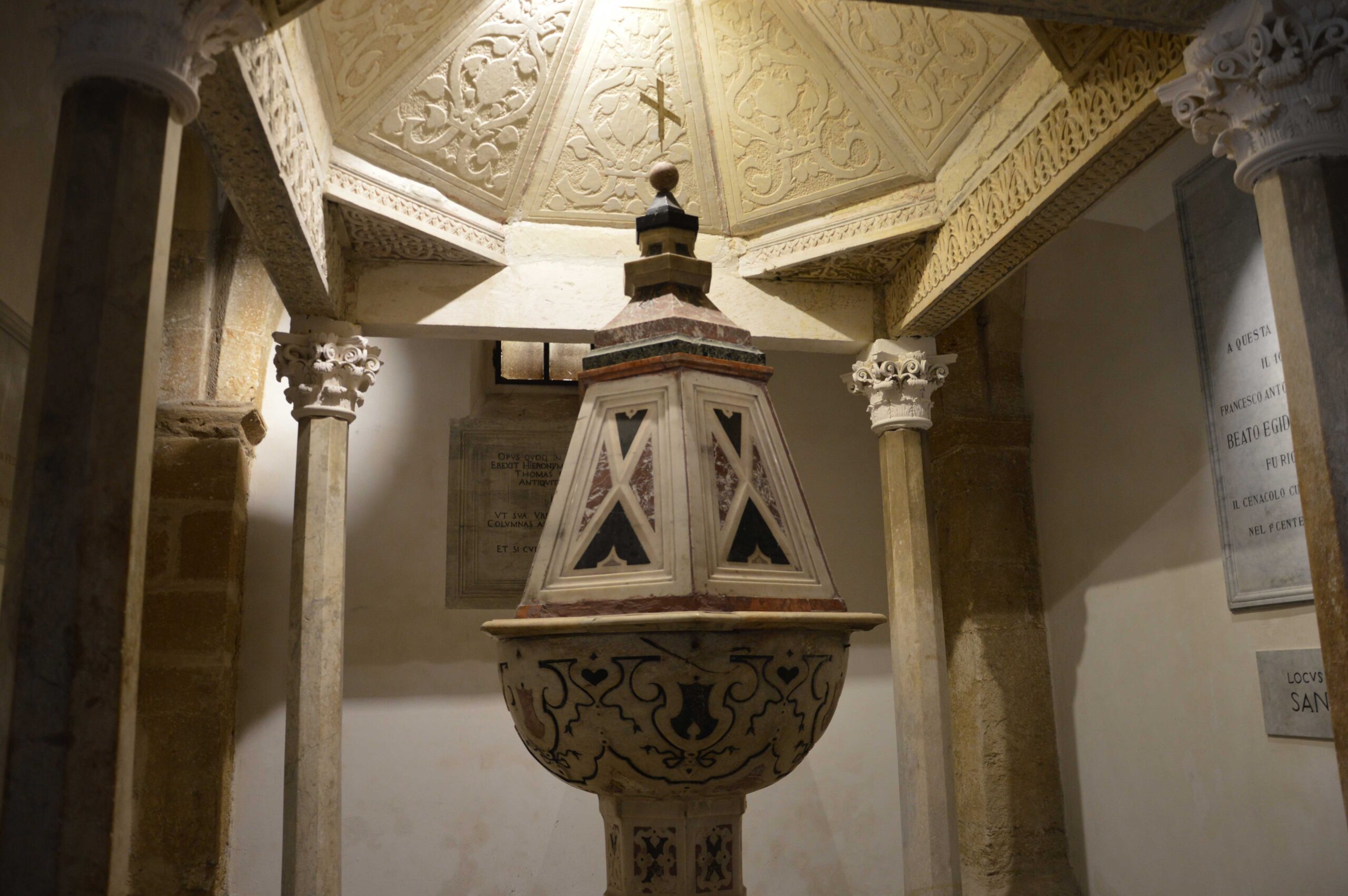 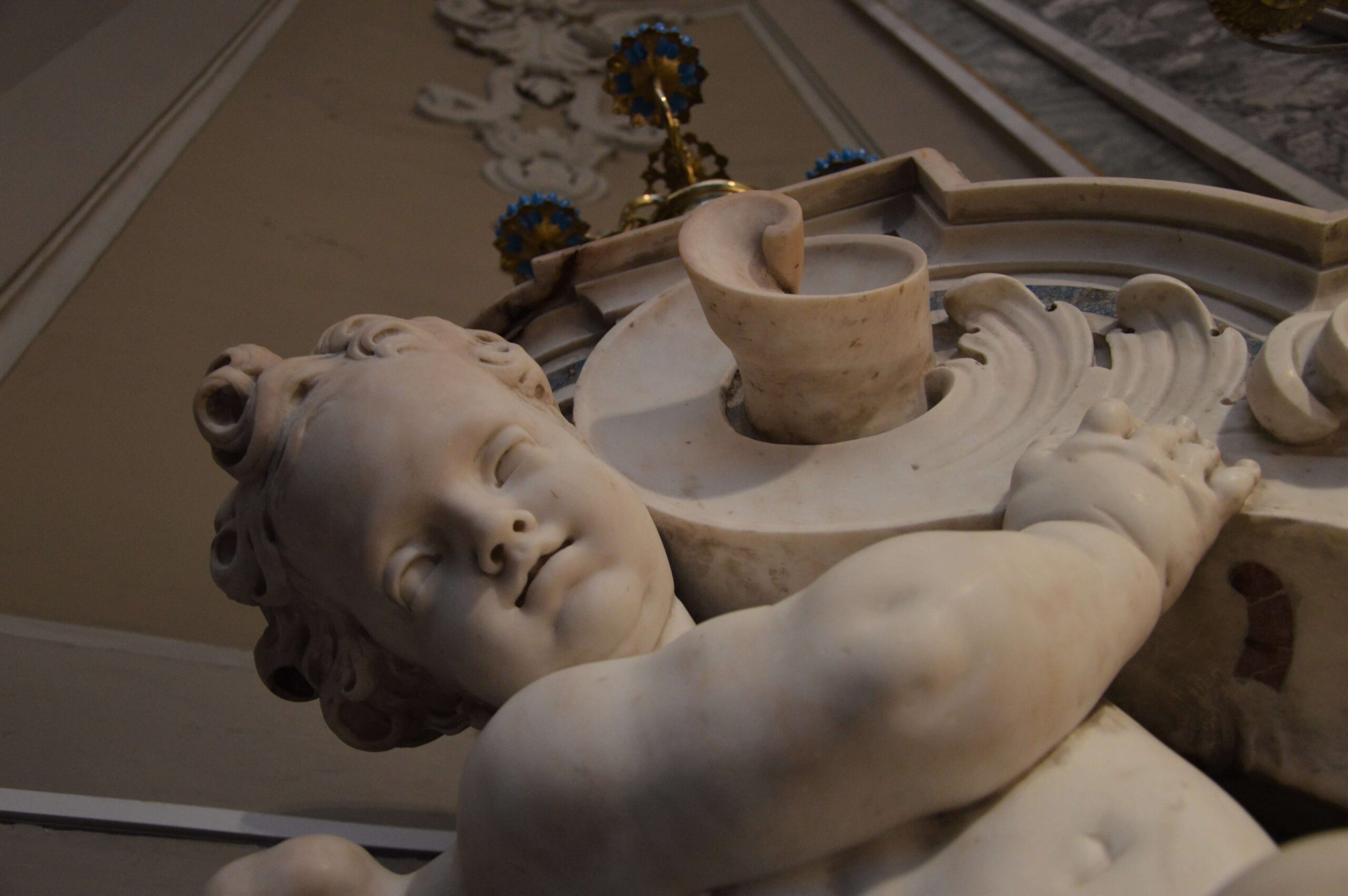 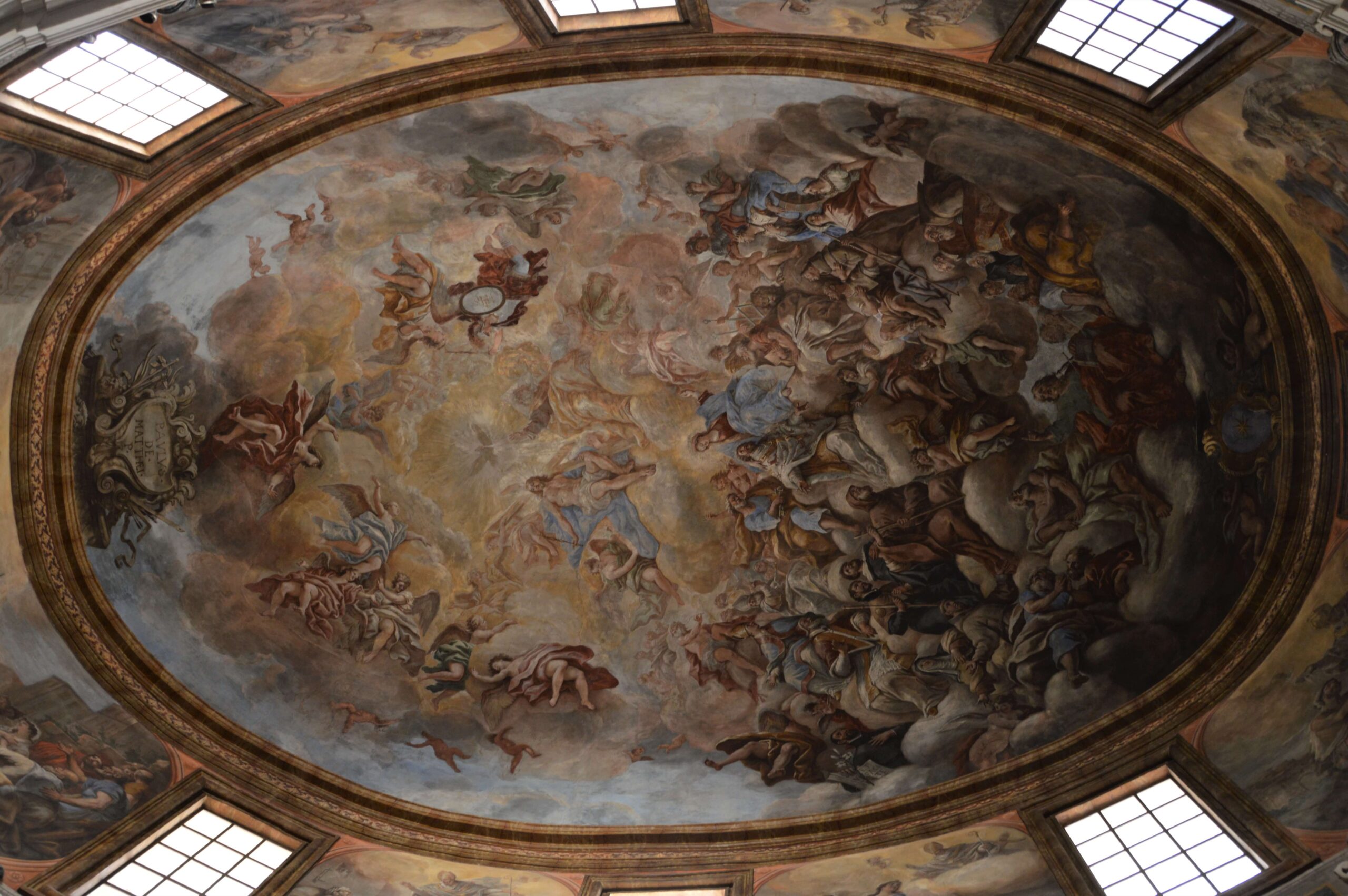 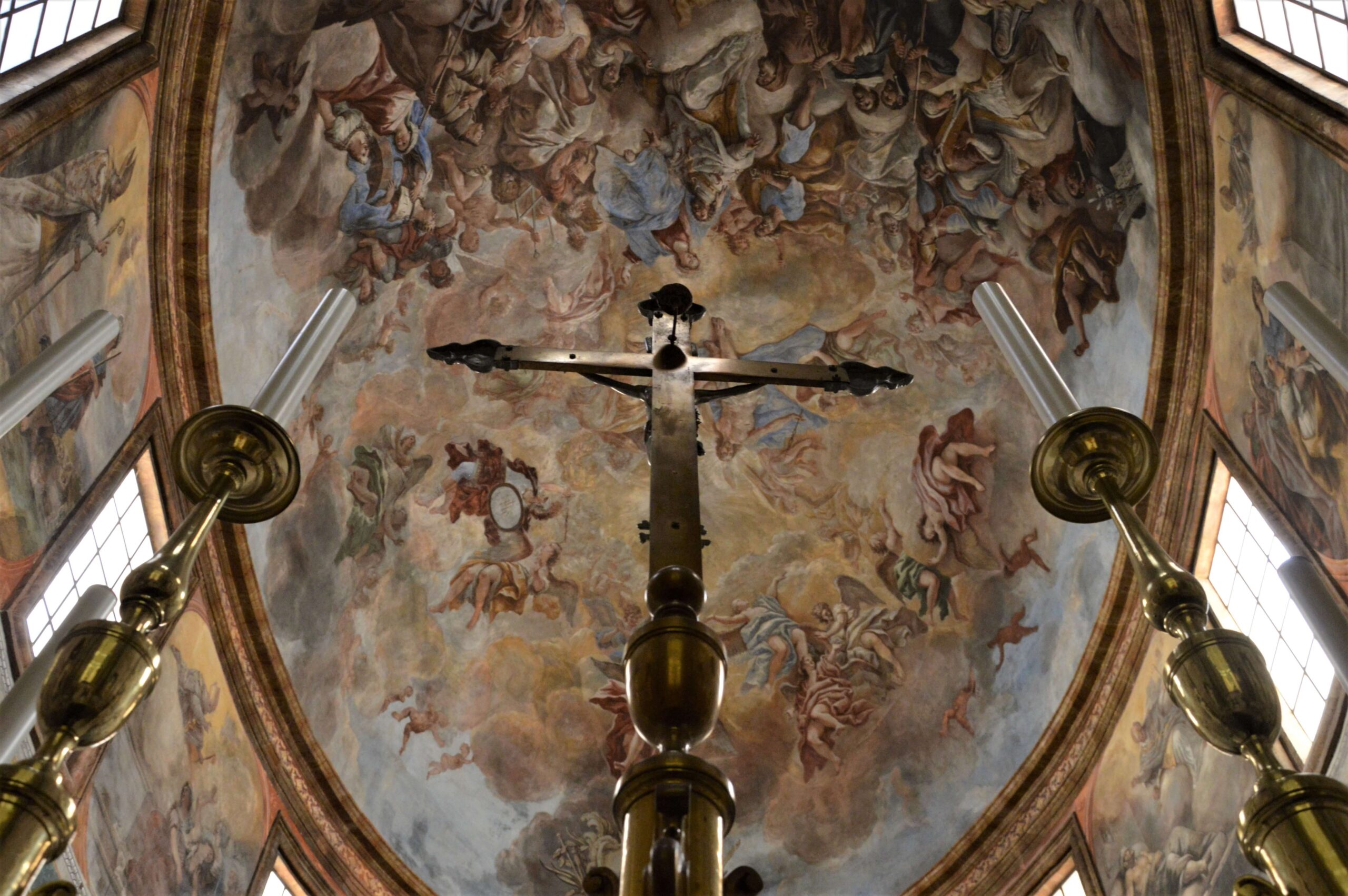 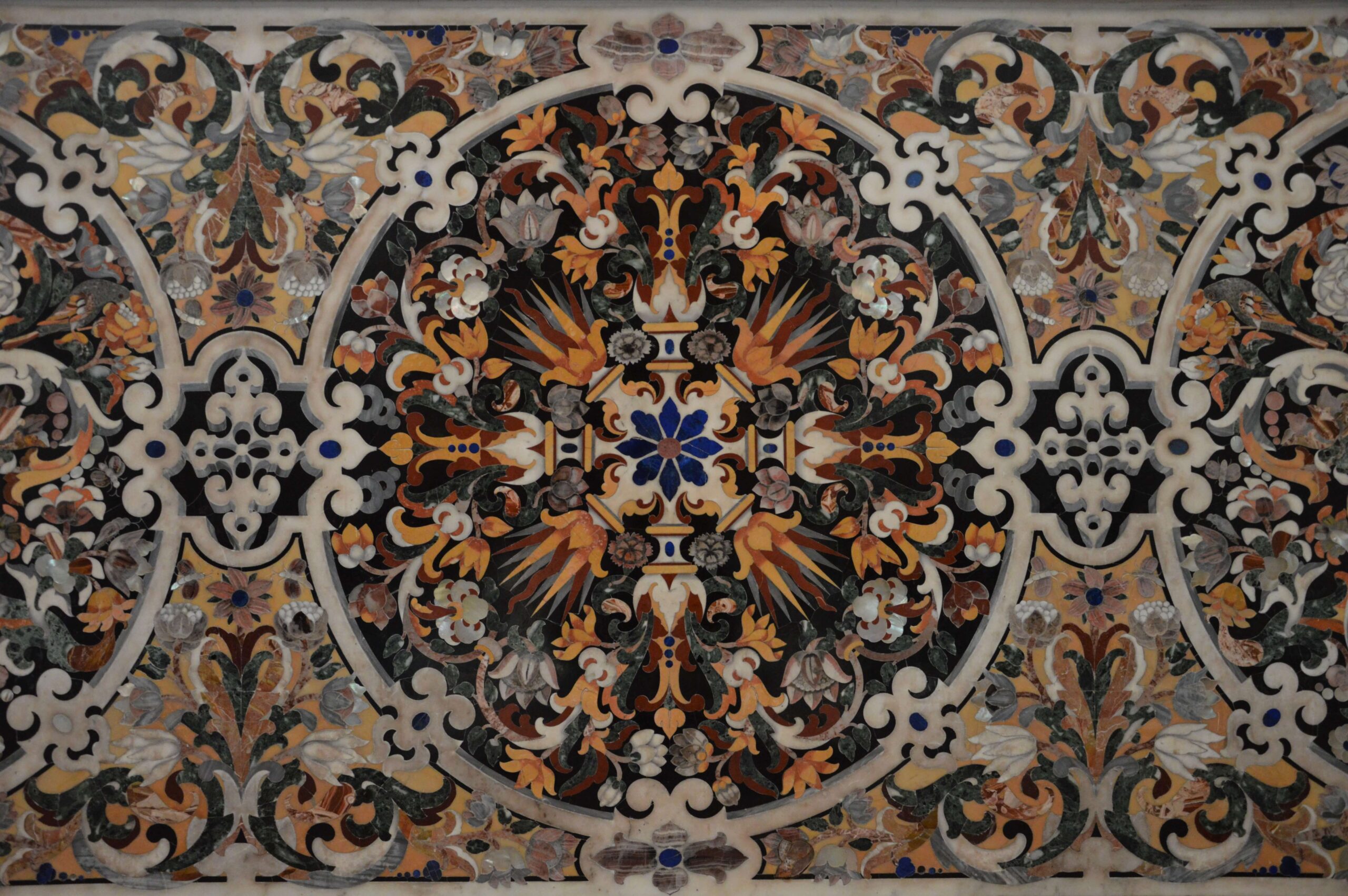 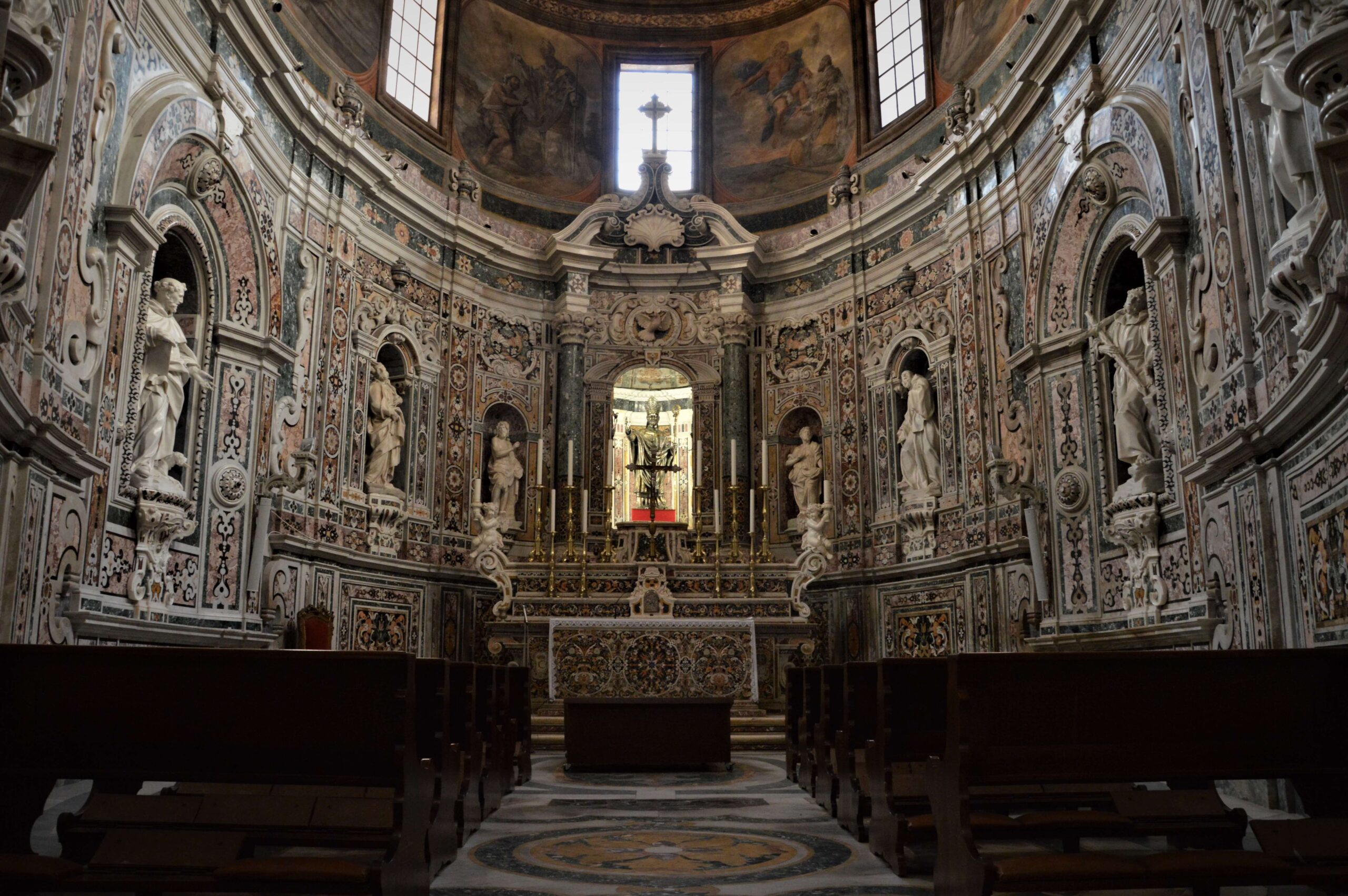 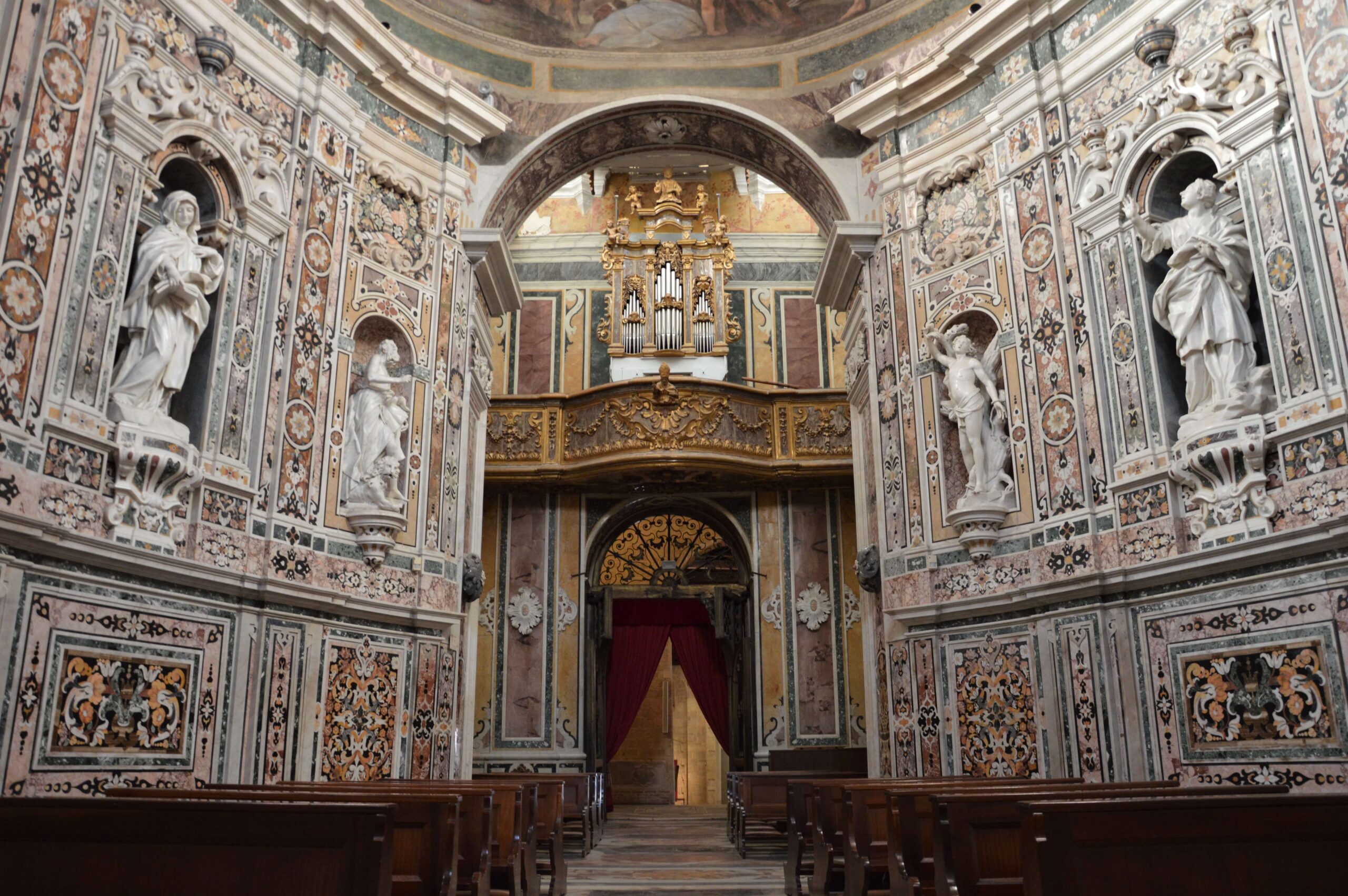 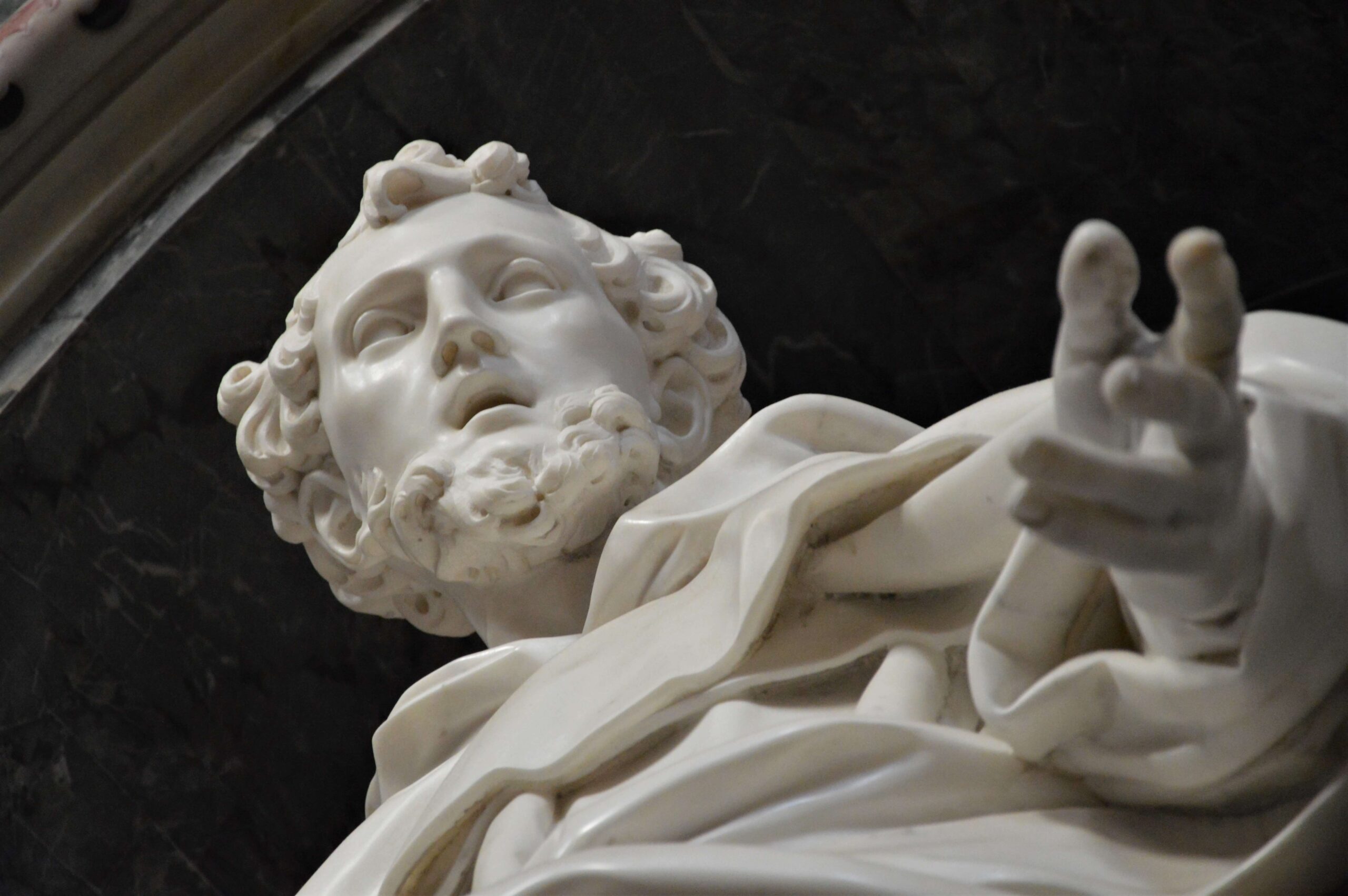 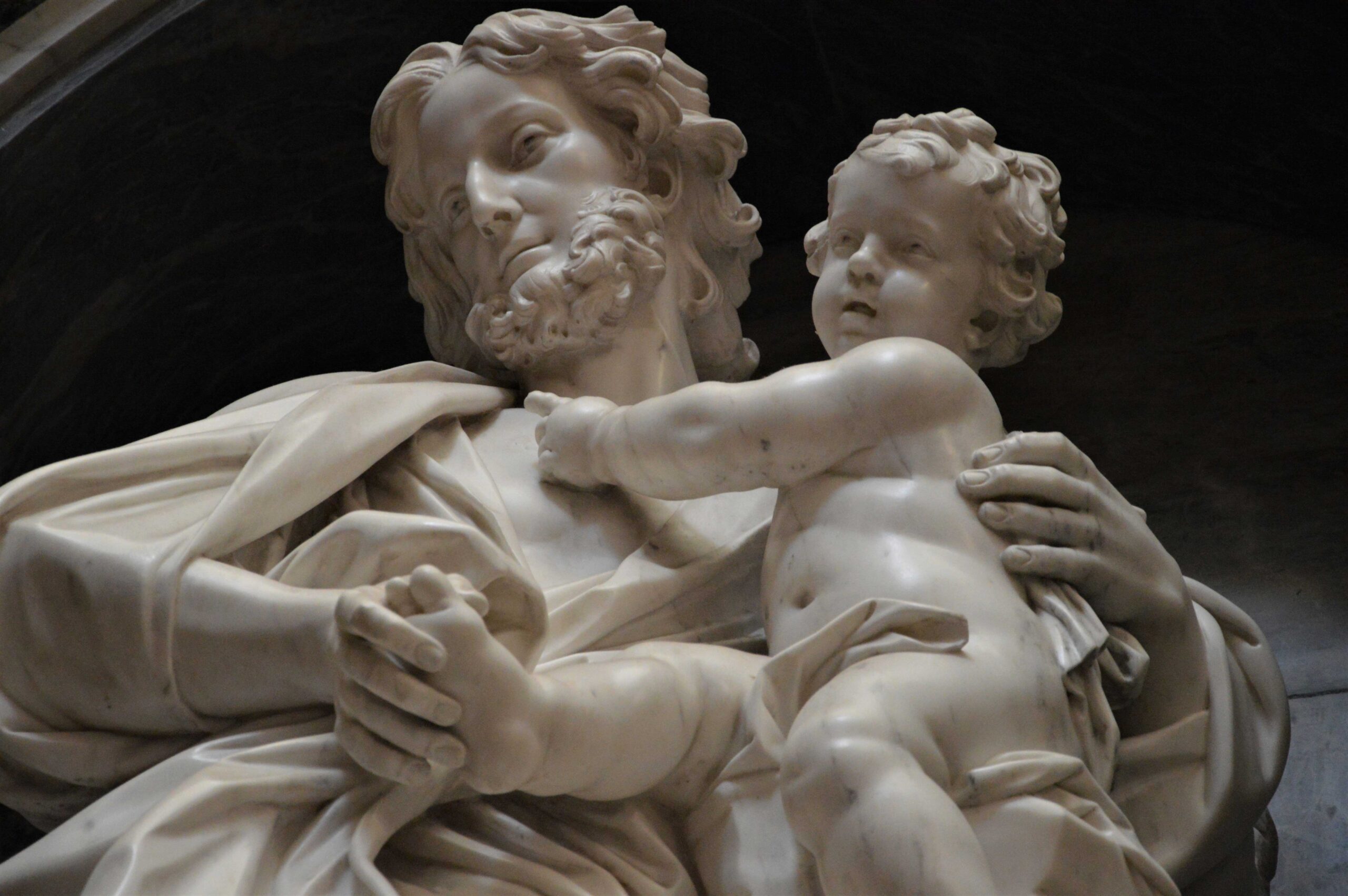 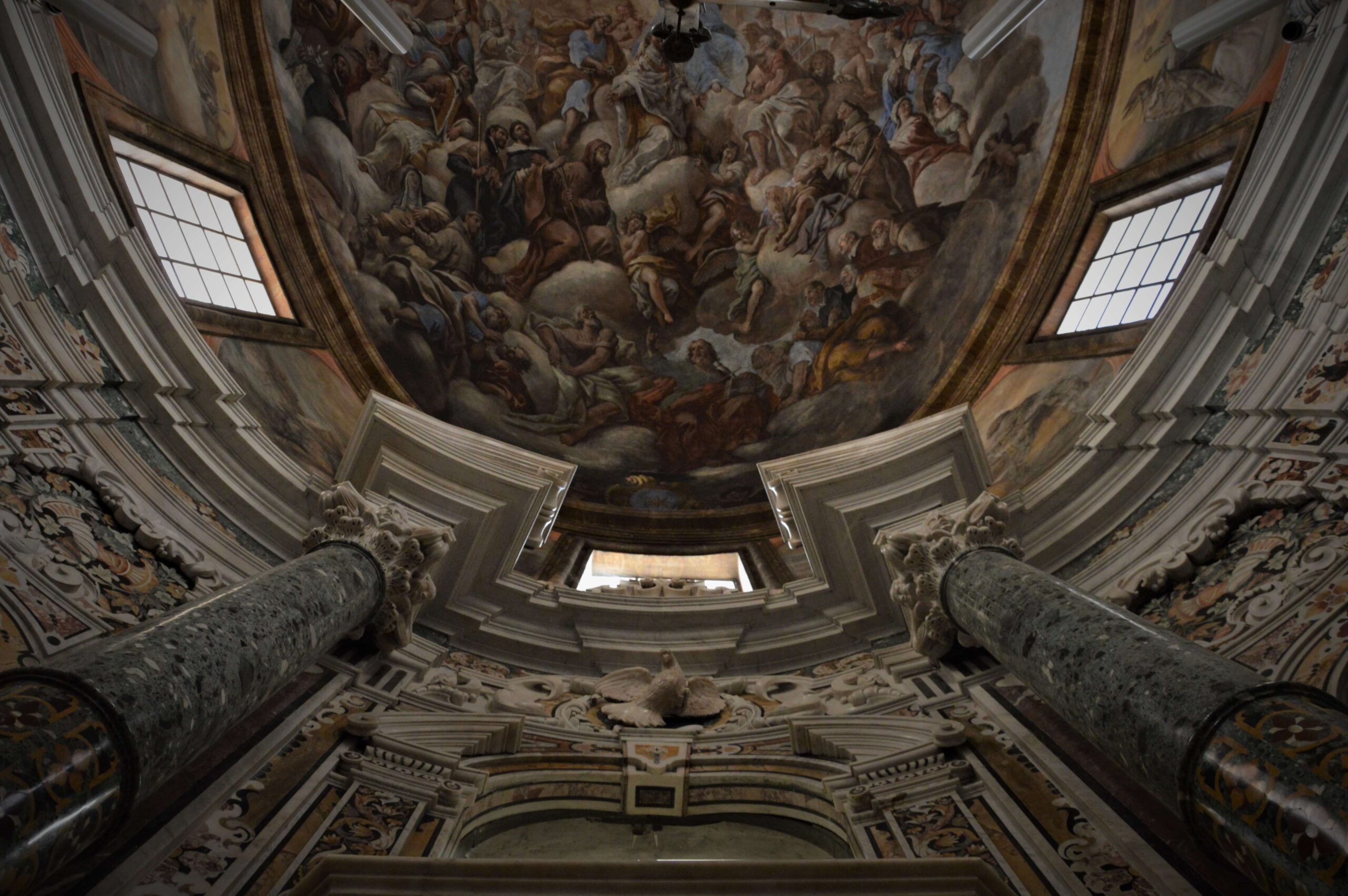 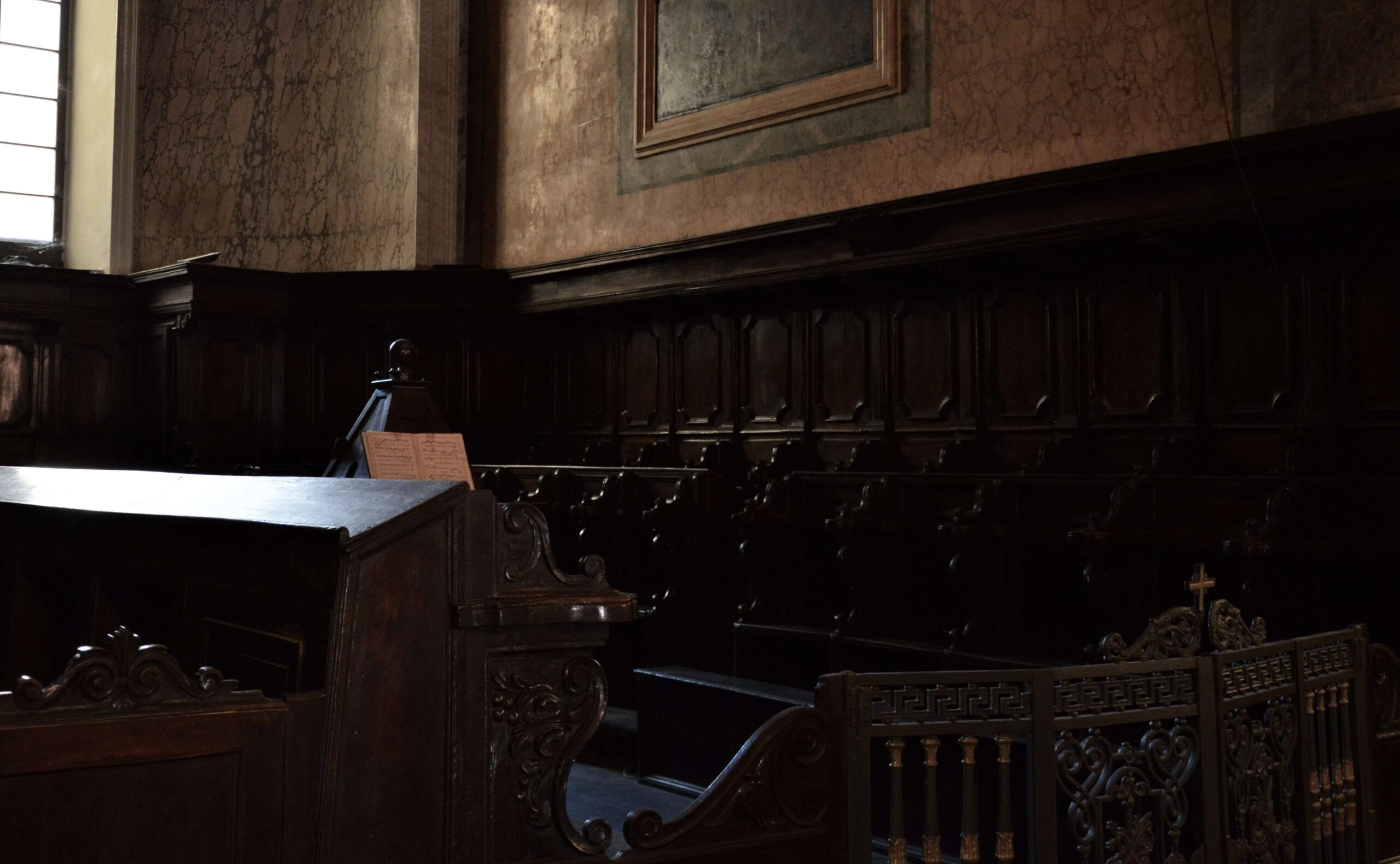 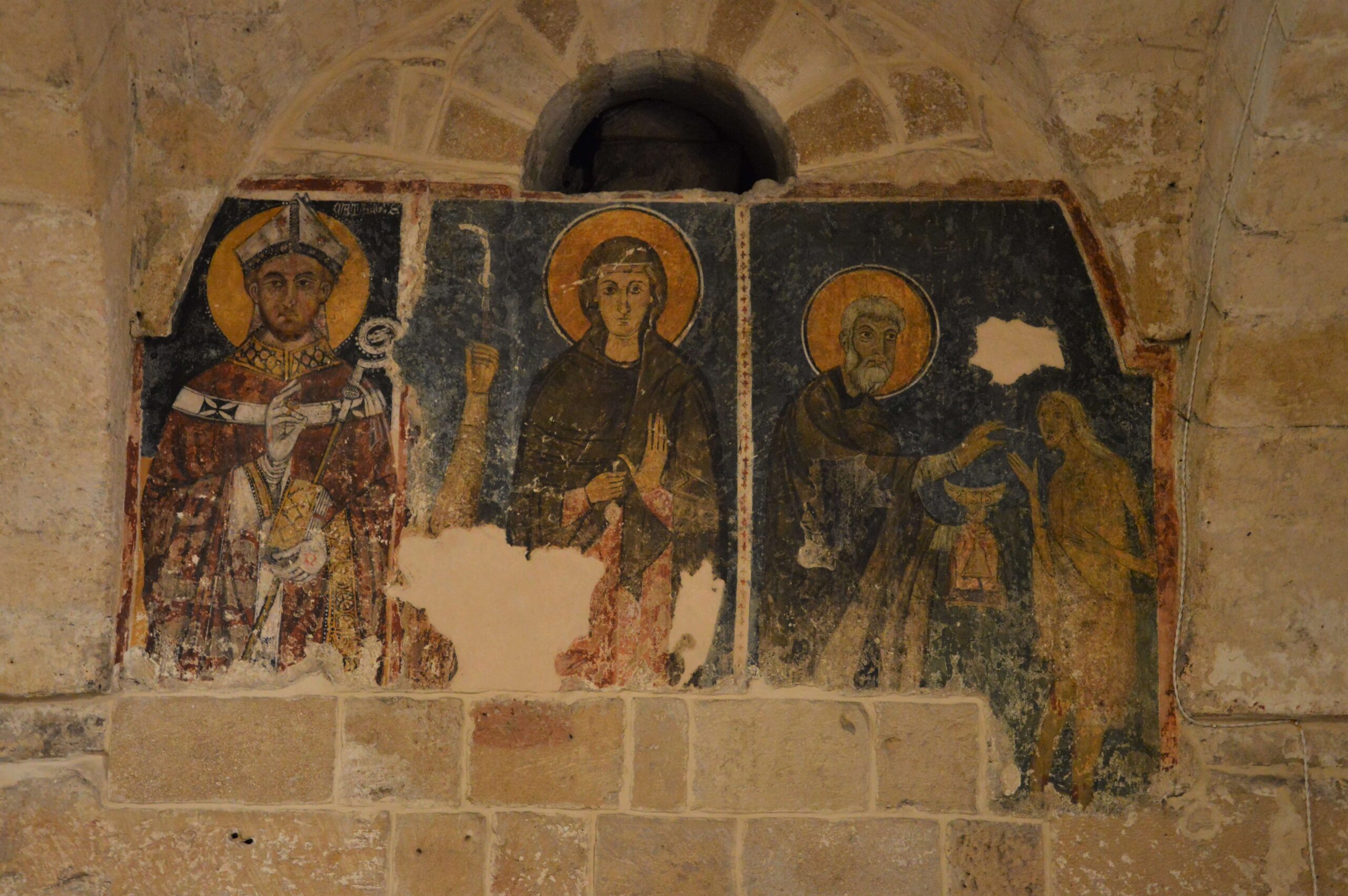 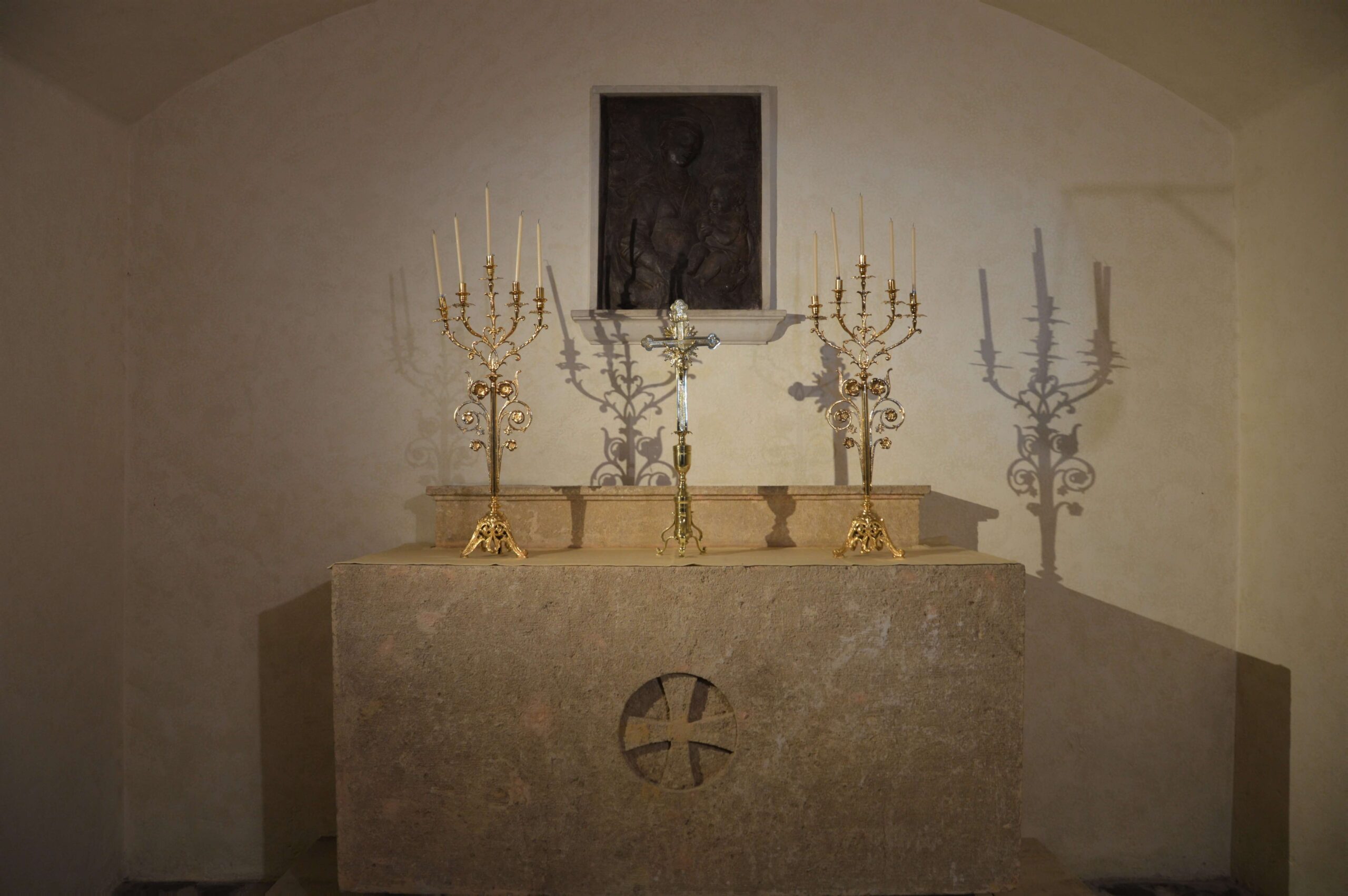 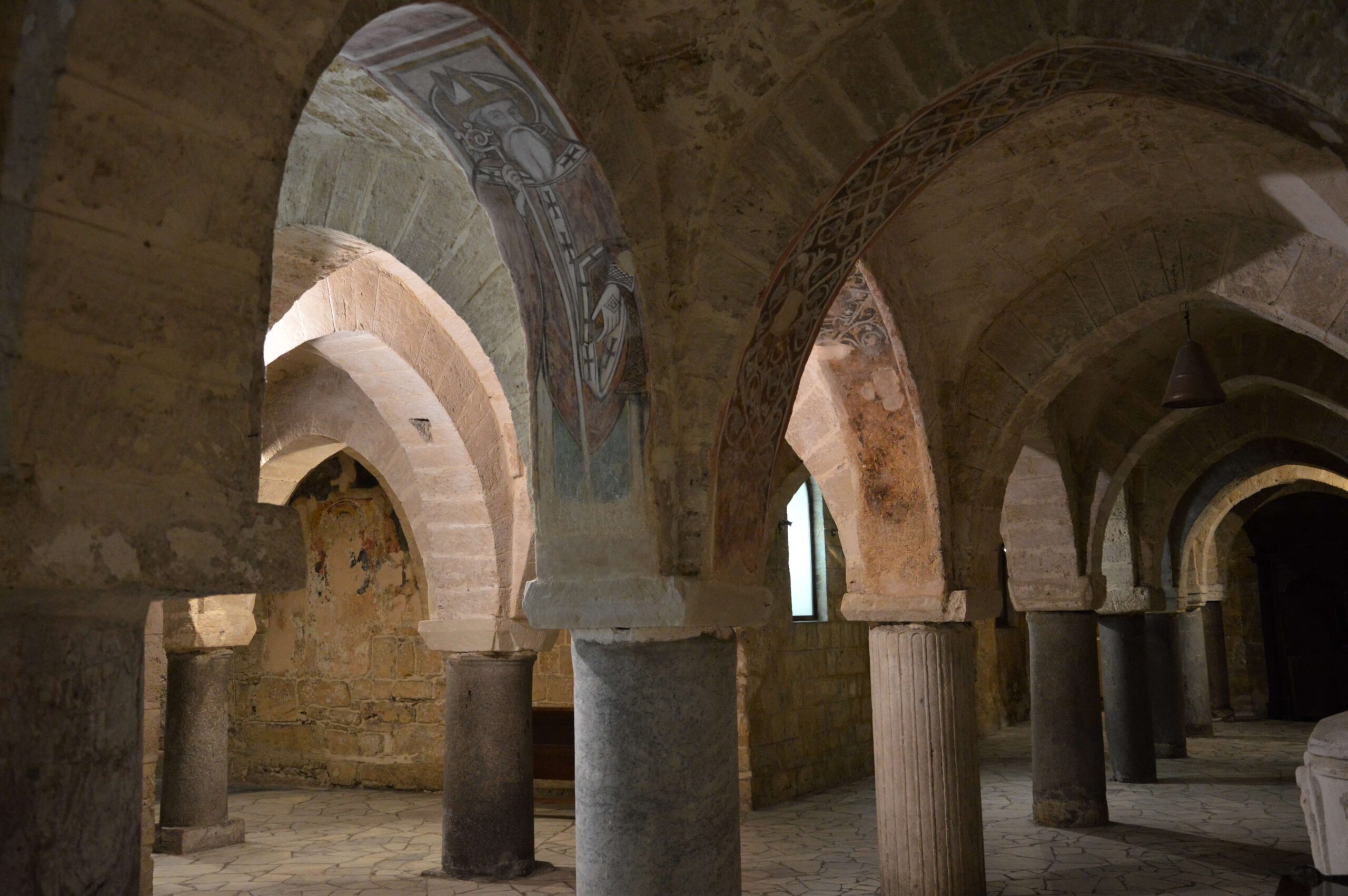 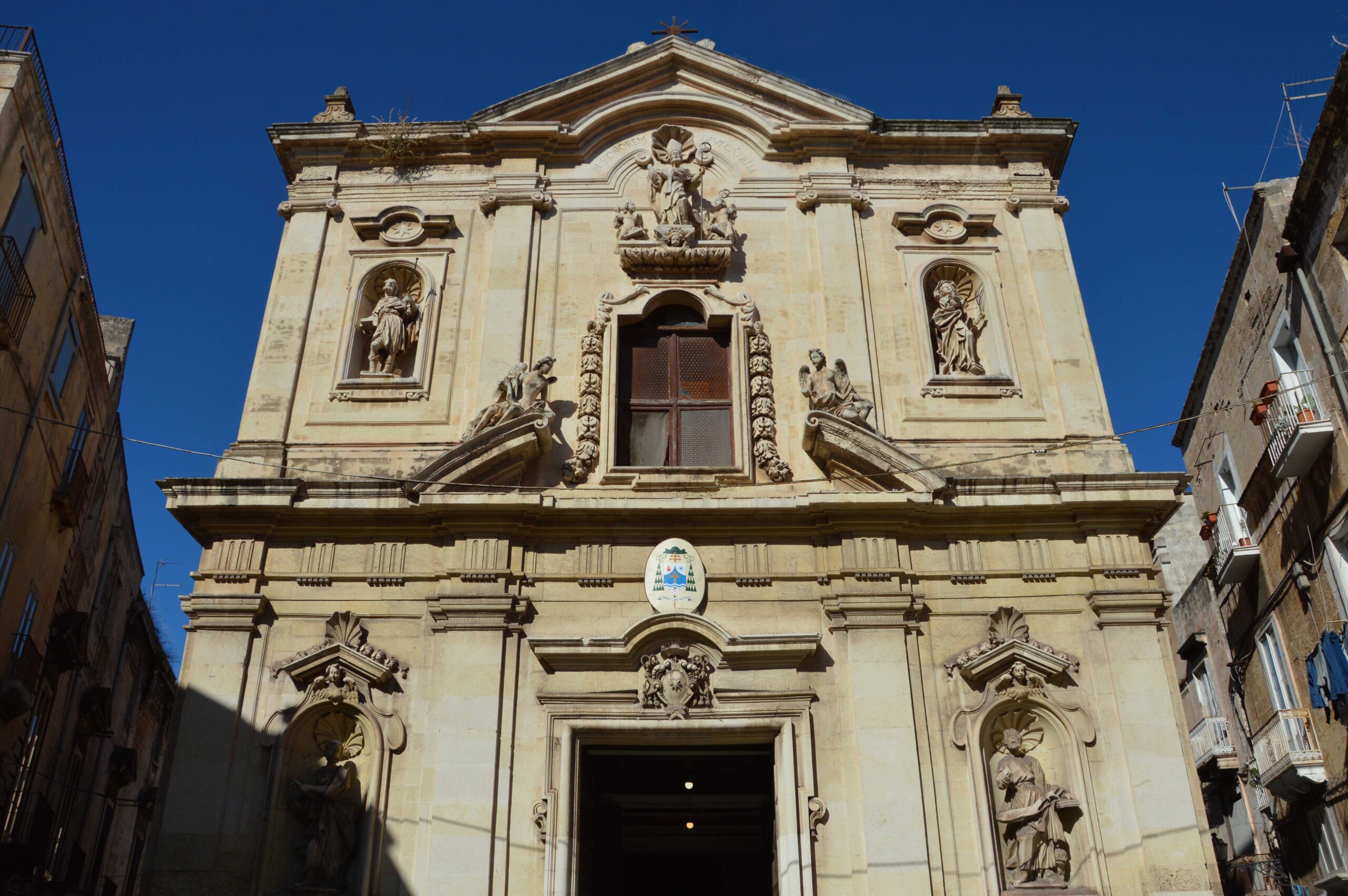 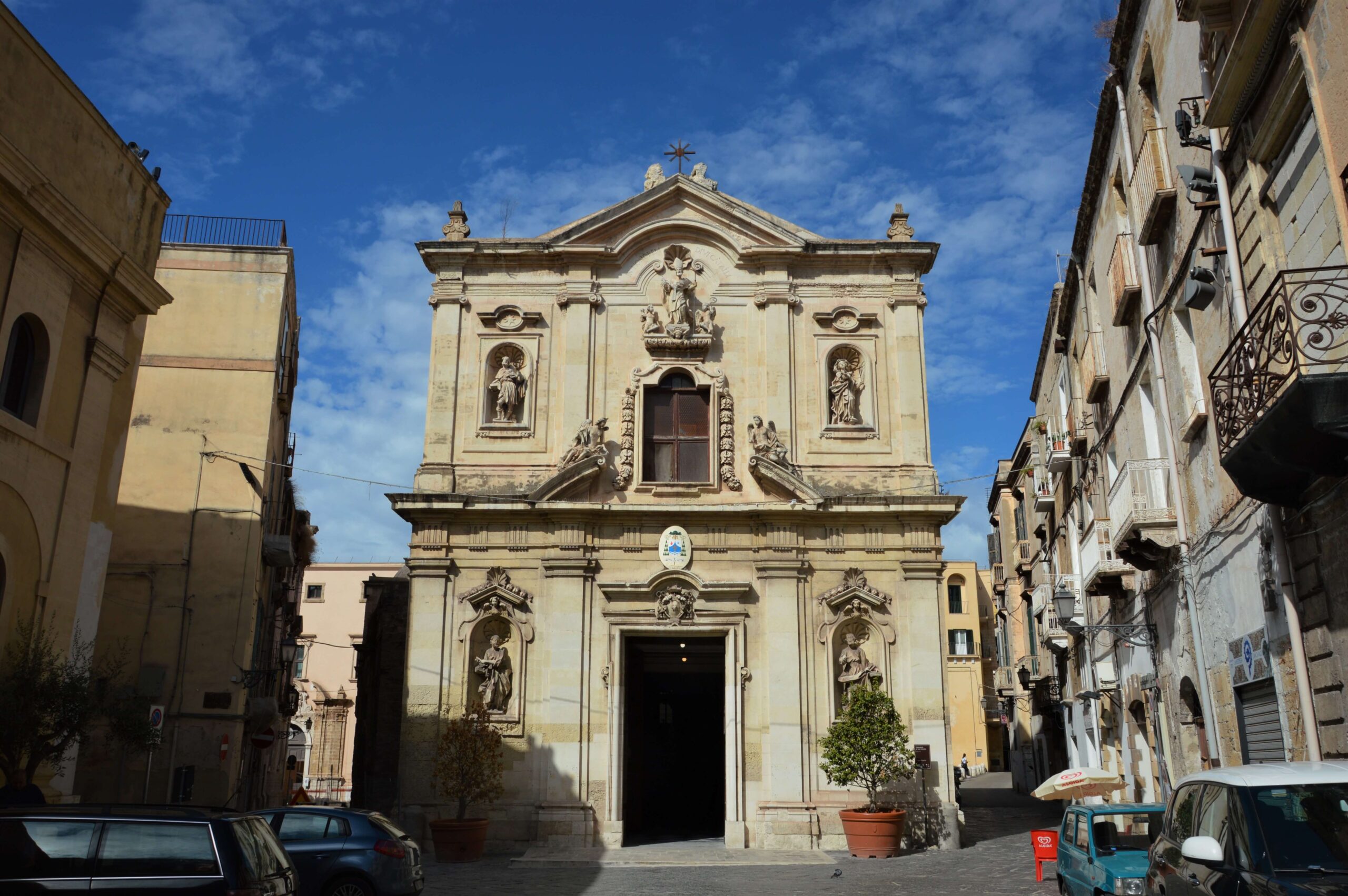 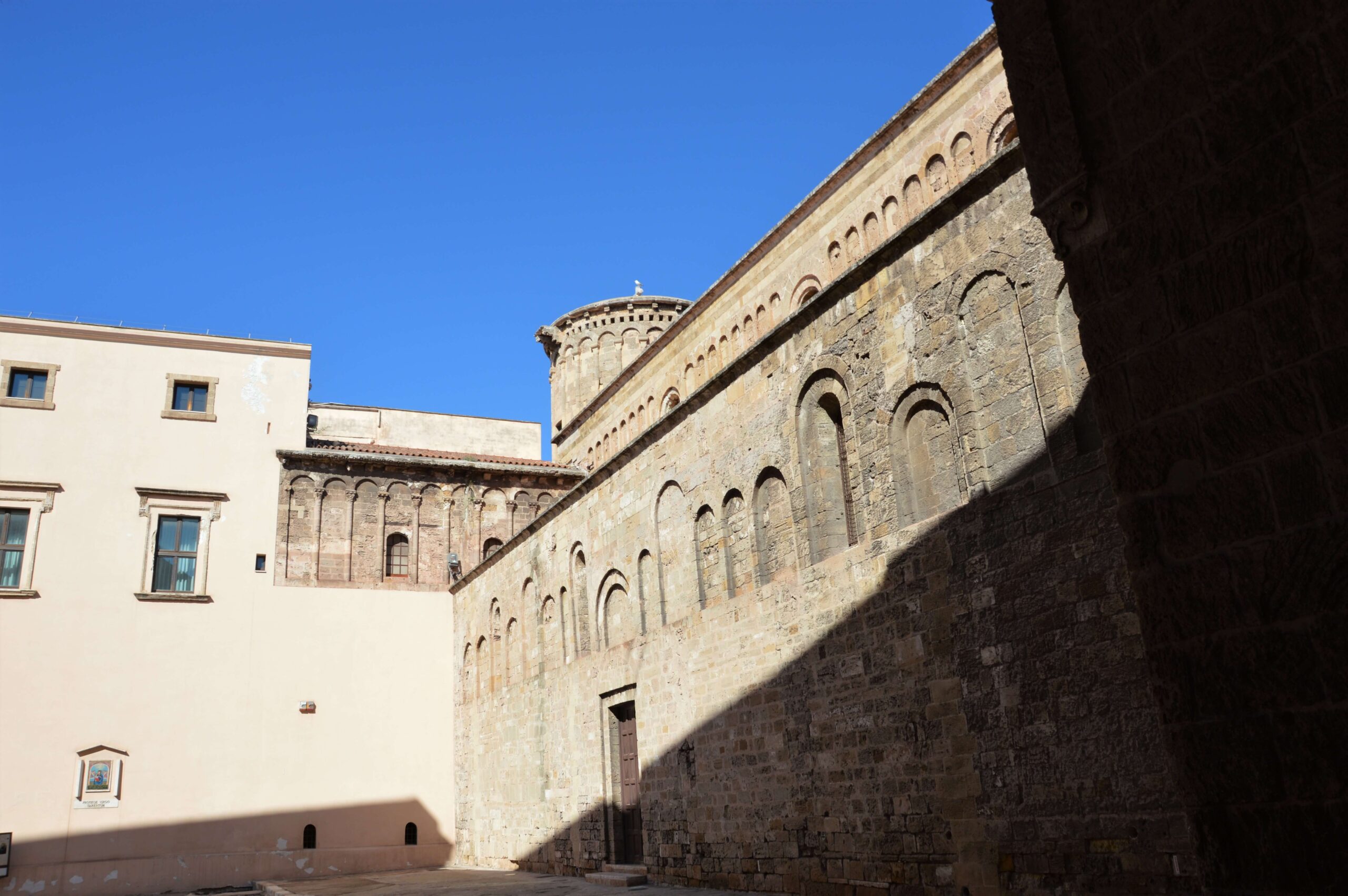 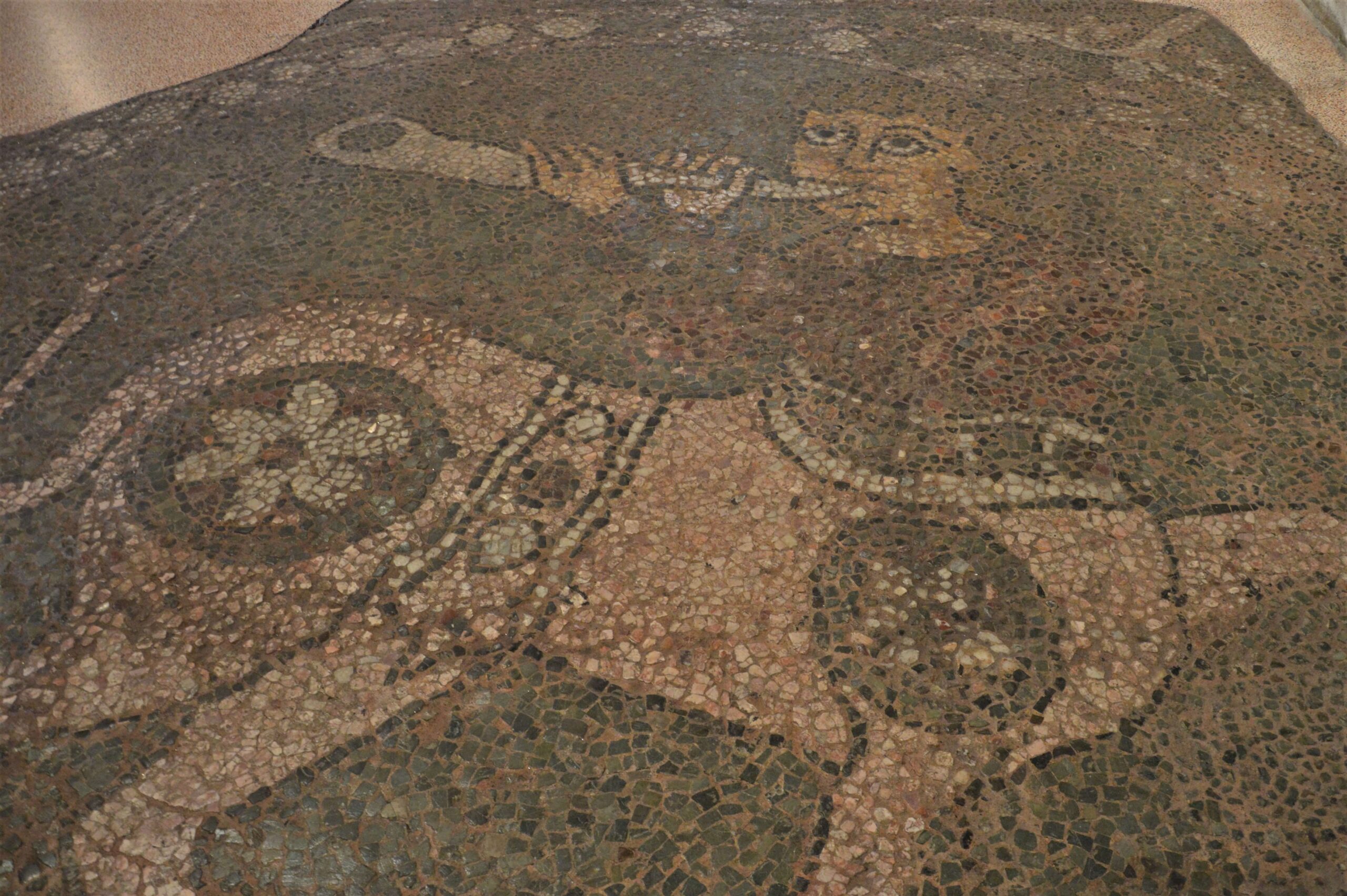 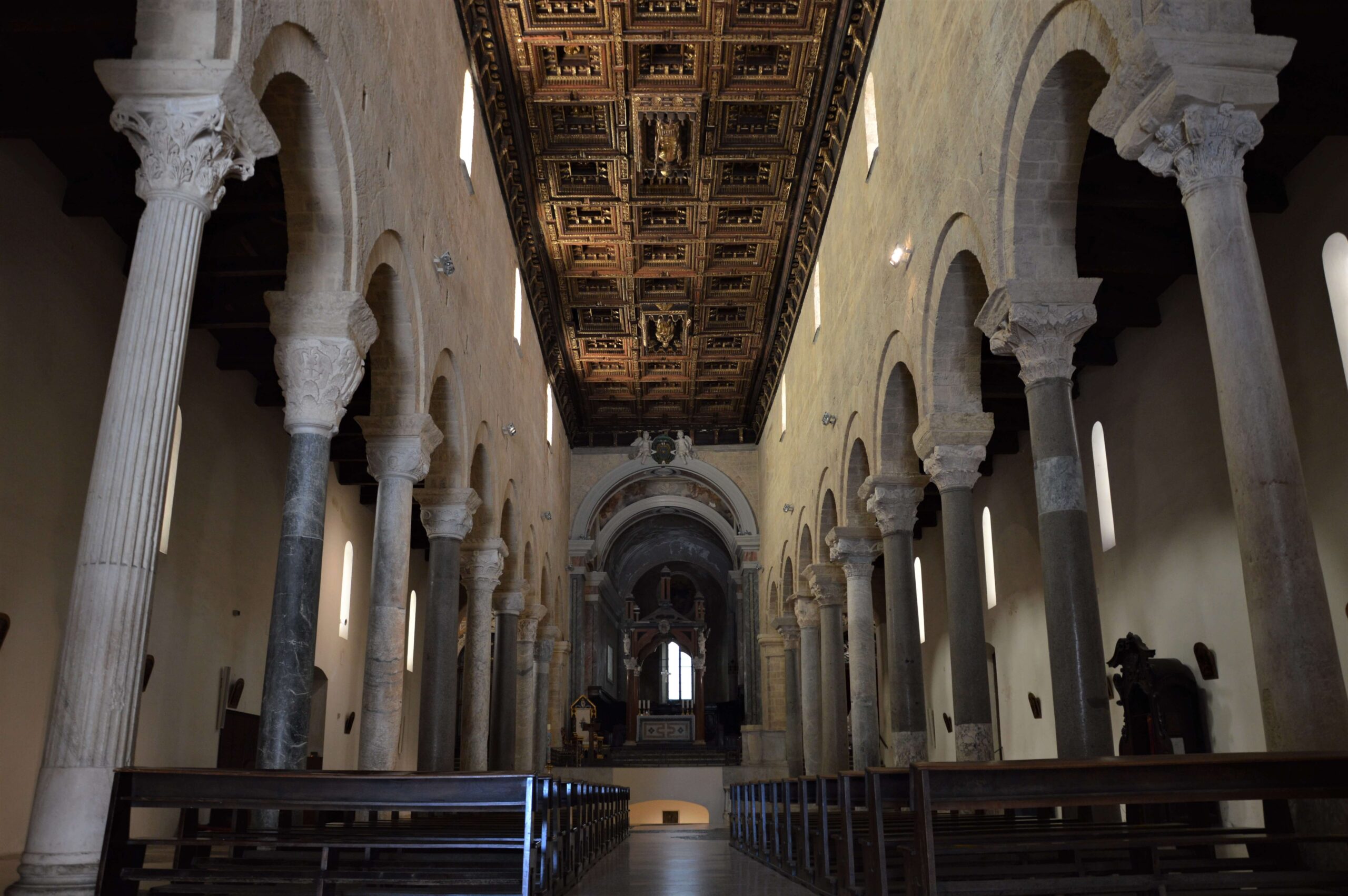 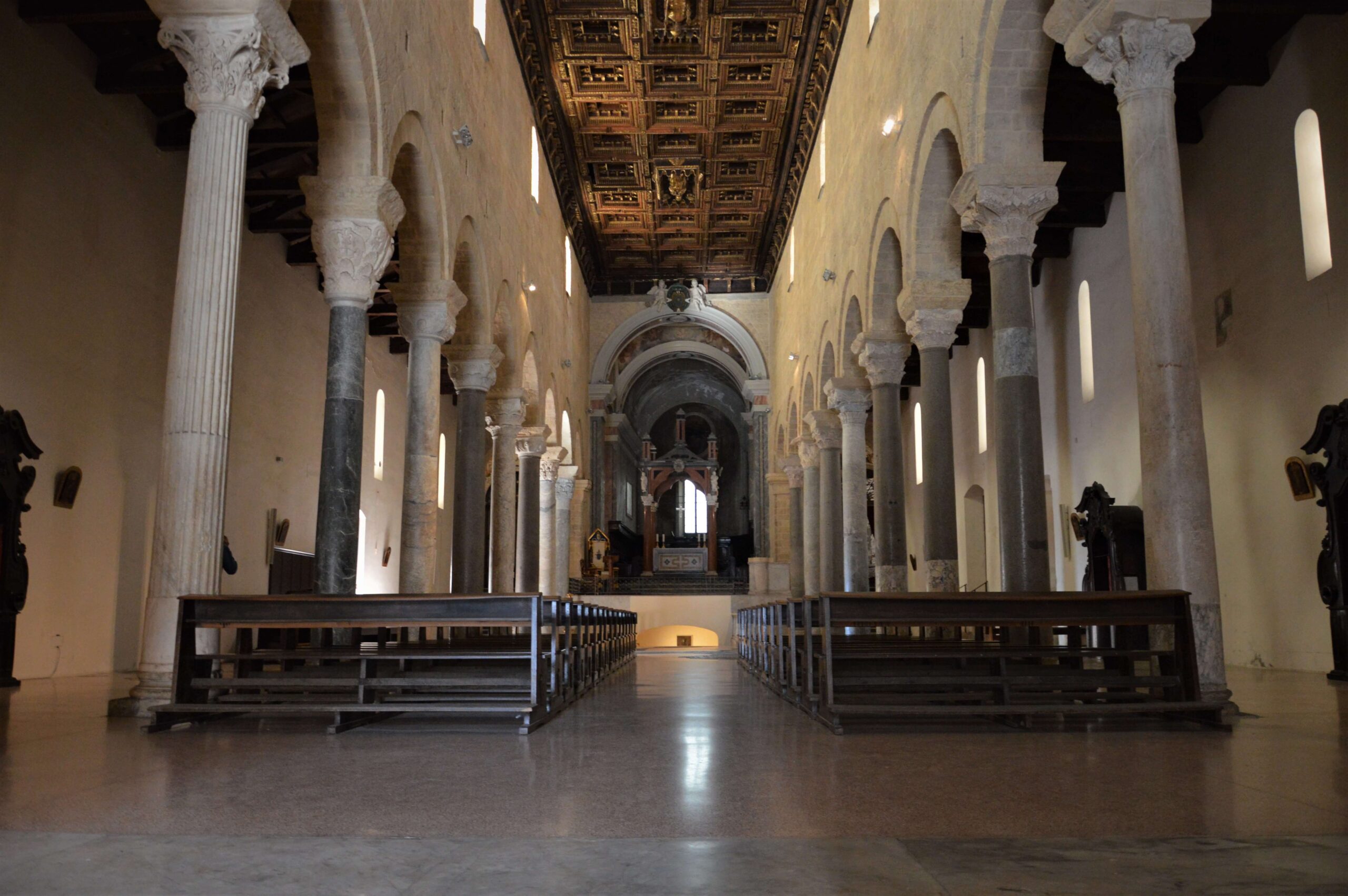 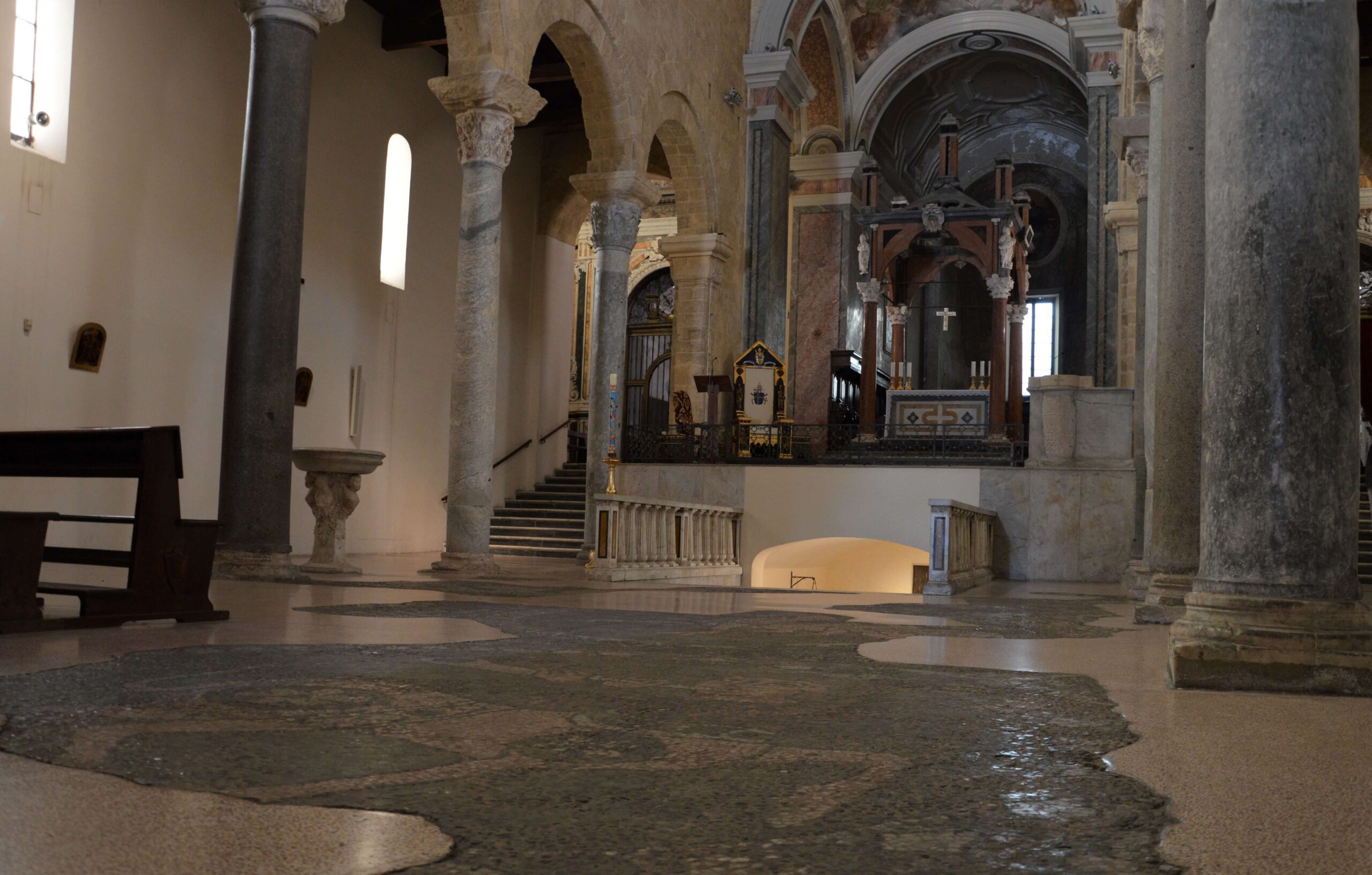 Originally dedicated to Maria Maddalena and then to St. Cataldo, Bishop and protector of the city, Taranto’s Cathedral is the most ancient in Apulia.

The first structure, probably already existing in the V century A.D., was drastically redesigned in the X century by the Emperor Niceforo Il Foca. Today, it presents itself as the result of the multiple renovations of the following centuries.

Stepping inside from the main entrance, designed by Mauro Manieri in 1713, and proceeding beyond the vestibule on which the old baptistery was facing to, you access to the magnificent central nave, characterized by the presence of old columns and capitals dated back to the Greek and Roman age. Also, there are still some traces of the medieval mosaic floor and the stunning coffered false ceiling in wood and gold, enriched by the statues representing St. Cataldo and the Assunta.

The mosaic, discovered in 1844 and linked to a certain “Petroius”, was accomplished between 1163 and 1165 and makes reference to the aerial flight of Alexander the Great in several churches and cathedrals of Apulia.

The archaeological excavations done in that area have brought to the surface many interesting remains of a sepulchre dated back to the Lombard period, between the VII and the VIII centuries A.D.

The altar was requested by Archbishop Caracciolo in 1652. It is surmounted by a precious ciborium in red porphyry on which are positioned the statues of the four evangelists. Behind it, there is a XVIII century wooden choir.

Alongside the major altar there are two big chapels. On the left side there is the Santissimo Sacramento chapel, decorated with two 17th century paintings of Molinari. The statues that decorate the marble and curved altar are by Giuseppe Sammartino, famous for being the author of the well-known statue of Cristo Velato in the Sansevero chapel in Naples.

On the right side of the major altar, beyond a majestic metal gate, there is the baroque big chapel of St. Cataldo.

In the vestibule we can admire the stunning marble statues representing St. Giuseppe with The Child and St. Giovanni Gualberto, both by Sammartino.

The big chapel has an elliptical plan and it is finely decorated with marble inlays, glass beads, mother-of-pearl and lapis lazuli. It also hosts an important set of statues (six of them are, again, by Sammartino).

The murals that celebrate the glory and the miracles of St. Cataldo are made by Paolo De Matteis, a baroque artist extremely active between the end of the 17th century and the beginning of the 18th century.

Inside the altar there are the mortal remains of St. Cataldo, discovered near the Baptistery in 1071. The alcove with silver doors, instead, keeps the statue of the protector, which is in silver as well.

Underneath the major altar there is the crypt, dated back to the X century and decorated with frescoes of various eras. Precious is the Florentine reinassance bas-relief in the entrance vestibule: it portrays the virgin Mary with a Child. Underground, more internally, there is the medieval sarcophagus, maybe of a young lady, probably dated back to the XIII century.

Basilica Cathedral of St. Cataldo is part of the following itineraries